Bleach (Volumes 1 through 28) by Tite Kubo (Story and Art) 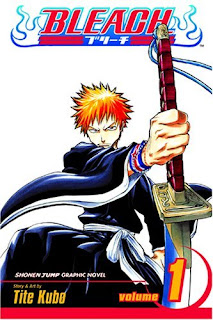 Ichigo Kurosaki can see dead people. Most people would be somewhat disconcerted to see apparitions before them, but not Ichigo. Being the nice guy he is, he tries to help these poor souls. Then one day he meets Rukia Kuchiki, a Soul Reaper from the Soul Society, and his life changes forever. In order to save his family from an attack by Hollows, evil spirits that prey on humans with spiritual energy, Ichigo absorbs some of Rukia's reiatsu, spirit pressure, and defeats the Hollow. However, Ichigo grabbed a bit more of Rukia's power than either of them thought and he now has to be a Soul Reaper in her place as she is now trapped in the World of the Living (or Earth for us human folk). The series follows the story of Ichigo and the Soul Society into many different adventures and battles.

It is easy to see why Bleach has become the phenomenon that it has. From the start of the series, you are transported to a world where things are not always what they seem. Soul Reapers walk the streets (and skies) defending humans and souls alike. Tite Kubo has created such fantastic characters that you can't help but feel that they are real. If you can't wait for the manga volumes to come out, why not catch this on-going series in Shonen Jump Magazine.

What makes the art of Bleach so outstanding is the fight sequences. With many manga with action sequences, you tend to miss some of what is going on. Somehow Kubo makes the action stand out and you really don't miss anything. In addition to the great action sequences are the two additional worlds Kubo has created, the Soul Society and Hueco Mundo (where the Hollows dwell). You really are transported to another time and place in Bleach.

Bleach was awarded the Shogakukan Manga Award in the shonen category in 2005. In addition to this, the volumes are frequently on the New York Times Manga Best Seller List (volume 30 is currently on the list and has been for the past four weeks).

If you enjoy the manga, you will love the anime series. You can now see all the action jump from the page to the big screen. While the anime does follow the manga storyline quite close, there are a few additional story arcs. Even with these arcs, the anime is quite enjoyable and will make you to want to see more. 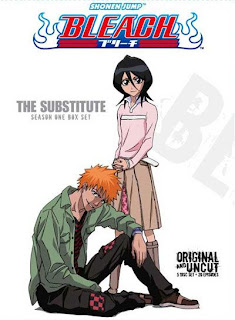 In addition to the anime series, two of the Bleach movies have been released here in the United States. These films are fantastic on their own and you don't have to know anything about the manga or anime series to enjoy them. In Bleach the Movie: Memories of Nobody, Ichigo comes across Senna, a Soul Reaper who has lost her memory. With a superb soundtrack and excellent fight sequences, you can't help but love this movie. In Bleach Movie 2: DiamondDust Rebellion, Captain Hitsugaya is wanted by the Soul Society for apparently stealing the King's Seal. Ichigo and friends try to get to the bottom of this mystery disappearance and help Hitsugaya clear his name. Another stand alone piece that fans and non-fans can enjoy. Look for more movies to be released later this year.
You can find the Bleach manga and anime by Tite Kubo on the CPL Catalog. If you enjoyed Bleach, you may want to try D.Gray-man by Katsura Hoshino or Fullmetal Alchemist by Hiromu Arakawa.
Posted by Michelle at 8:11 PM 0 comments