Due to continuing hazardous conditions, all Chesapeake city offices, courts, libraries and community centers will be closed Tuesday, December, 28th, and all evening activities are canceled.  To keep up to date with the advisories, you can check the city's website, or follow the library on Facebook and Twitter.
Be safe!!
Posted by Michelle at 8:14 PM 0 comments

All Chesapeake city offices, courts, libraries and community centers will be closed Monday December, 27th, and all evening activities are canceled.  To keep up to date with the advisories, you can check the city's website, or follow the library on Facebook and Twitter.
Be safe!!
City of Chesapeake
http://www.chesapeake.va.us/
Chesapeake Public Library - Facebook
http://www.facebook.com/ChesapeakePublicLibrary
Chesapeake Public Library - Twitter
https://twitter.com/infopeake
Posted by Michelle at 10:34 PM 0 comments

Calling all Otaku!  Join us at the Indian River Library tomorrow (Thursday) for Anime Addicts.
Be thankful for CLAMP! This month we will be watching episodes of xxxHOLiC and X. The popcorn’s on us.
Join fellow Otaku to watch anime, discuss manga, and help add content to the A Graphic Invasion blog. No registration necessary.

Posted by Michelle at 6:02 PM 0 comments

In an effort to combat online piracy of their content, 37 Japanese manga publishers are set to launch a manga web portal sometime before the new year.  The portal is tentatively being called, "J Manga Portal Site" and will distribute manga digitally from participating publishers.  In addition to the digital manga, the portal will also include news and information about other titles from the publishers.  Some of the 37 publishers are large publishing firms of Hakusensha, Kadakawa, Kodansha, Ohzora, Shogakukan, and Shueisha.

The initial web portal will be in beta form and purported to be available by the years end.  The publishers are planning on having the public site available by March of next year.  For further details see the ICv2 and Anime News Network articles.
Posted by Michelle at 2:27 PM 0 comments

Get the Latest Graphic Novels and Manga with Wowbrary

Want to stay up to date on the latest graphic novels and manga at the Chesapeake Public Library?  We now have a great service called Wowbrary, which is a newsletter that is delivered right to your inbox.  This newsletter showcases the week's top choices at the Chesapeake Public Library.  In order to see the latest and greatest graphic novels and manga, just click on the Comics & Graphic Novels link located on the left-hand side of screen (under the Young People category).

Your browswer will then open up ﻿a new window and you can see all of the new graphic novels and manga and request them at your local library branch.  Like what you see?  Sign up today!
Posted by Michelle at 1:52 PM 0 comments

Telling ghost stories is a favorite past time of Mai Taniyama and her friends--that is, until she meets 17 year-old Kazuya Shibuya, the man sent by Shibuya Psychic Research Center to investigate paranormal activity at a supposedly haunted school. When Mai gets caught in a dangerous situation, she is rescued by Kazuya's assistant. Saving her lands the assistant incapacitated, and Kazuya demands that Mai become his assistant instead.

While there are main plot points to this series, it is very much a collection of short stories.  With Ghost Hunt you enter a world full of paranormal activiy, ghost stories, and folklore.  Once you start watching, you will not want to stop!

If you enjoyed the anime, check out the manga available at the Chesapeake Public Library.

Our members have chosen a manga and anime series that they think you should check out.  Come back to the A Graphic Invasion Blog to see the choices.

The Anime Addicts anime club is sponsored by FUNimation's Operation Anime.  If you were at the program, please take the following survey to allow us to keep getting the latest and greatest anime from FUNimation.
Posted by Michelle at 5:49 PM 0 comments

﻿This November, Tokyopop is doing something innovative.  Each Friday they will release a motion comic of one of their titles on the video site Hulu.  This Friday look for the comic GYAKUSHU (rated OT for older teens and adults).
If you are curious as to what a motion comic will look like, check out Buffy the Vampire Slayer, Season Eight already on Hulu.


If you like the Buffy motion comic, why not check out the graphic novels from one of the Chesapeake Public Library branches.
Posted by Michelle at 1:46 PM 0 comments

Posted by Michelle at 4:50 PM 0 comments 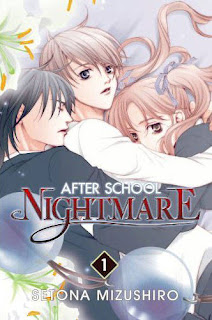 Mashiro Ichijo has a big secret to keep, but in high school, who doesn't? He manages to keep it hidden and still maintain his kendo and popularity. As time passes, it gets harder and harder to keep it up however. He lost his kendo match with Sou and his secret forces him to quit the club as the story begins. Mashiro and others have been noticing that other kids in the school have been disappearing and no one can remember quite who they were and what happened to them. When he is invited by a school nurse to a basement infirmary down a staircase that wasn’t there before, he will find out that he isn’t the only one in his school with a deep secret. The story goes into questions of identity, gender issues, conformity and relationships in a uniquely visual way.

This manga seemed a bit too far fetched and somehow gimmicky for me to really get into at first glance with its unusual love triangle. Once I started the book though, I was really upset I had only checked out the first one and had to wait another day to read more. Give it a shot and keep an open mind.

The art in After School Nightmare isn’t the best. It does start off with a few color pages which are nice looking but it isn’t the kind of book you will want to spend time going back simply to look at the pictures.

Library Wars: Love and War (Volumes 1 and 2) by Kiiro Yumi (Story and Art) 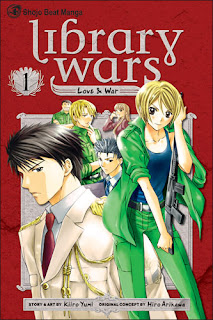 In the not so distant future, the government has created a committee to rid the populace of books that it deems unsuitable.  However, there is one agency that stands up to them - the library.  After a tragic incident between an armed political group and the library, it became apparent that there was a need for a military force at the library.  From that time on, the war between the Media Betterment Committee and the Library Forces continued to escalate.

When Iku Kasahara finally finds the book she has been waiting years to read, it is suddenly on the MBC's confiscation list.  She tries to save the book from destruction by saying she will steal it, but the MBC attempts to take it by force.  She is rescued by an unknown officer in the Library Forces and from that day on she vows to join their ranks.  Library Wars follows the story of Kasahara and her struggle to become a member of the Library Force.  Through her bumbling and narrow scrapes, she is known to be rather impulsive, but dedicated.

What makes this series interesting is the blend of both action and romance.  Library Wars is categorized as a shojo title, but there is enough action to make this interesting for the shonen fans.  While the main storyline is about the war between the Library Forces and the Media Betterment Committee, the main focus of the series is the relationships between characters, especially Iku Kasahara and her commander, Atsushi Dojo.  Not only that, we also are subjected to Kasahara's internal monologue about her feelings towards Dojo and others.  Even with the focus on relationships, the main story is enough to keep you interested in the world of Library Wars.

The art style is not typically shojo (you can tell most of the men apart) and the action is clear and expressive.  The backgrounds are well defined and make you feel that you are with the characters.

Banned Books Week 2010 is the twenty-ninth annual celebration of the freedom to read. This freedom, not only to choose what we read, but also to select from a full array of possibilities, is firmly rooted in the First Amendment to the U.S. Constitution, which guarantees freedom of speech and freedom of the press. Although we enjoy an increasing quantity and availability of information and reading material, we must remain vigilant to ensure that access to this material is preserved; would-be censors who continue to threaten the freedom to read come from all quarters and all political persuasions. Even if well intentioned, censors try to limit the freedom of others to choose what they read, see, or hear.


Ten Most Challenged Graphic Novels 2010
Check out your copy today!

The League of Extraordinary Gentlemen: The Black Dossier
Sexually Explicit Content and Unsuited to Age Group

Posted by Michelle at 7:37 PM 0 comments