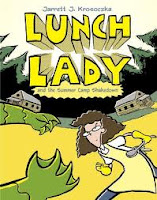 The Breakfast Bunch is on their way to their first sleep away summer camp (with no technology). Guess who they run into as they get off the bus - the Lunch Ladies! The camp legend of a swamp monster seems to have come true. Everytime the swamp monster shows up another activity is cancelled. Talk about boring! Can the Lunch lady figure out who is behind the swamp monster in time?

Cool gadgets that remind me of Inspector Gadget. I read this book to a group of 5-8 year olds. They voted it their favorite of everything I read and several boys wanted to know if there were more Lunch Lady books. Definitley some humor in this series. I heard some snickers while I was reading.
Posted by Christine at 11:16 AM 0 comments

Vampire Academy Goes Graphic
According to Shelf Awareness, the latest young adult series to get the graphic treatment is the Vampire Academy series by Richelle Mead.  It was announced at Comic Con that the series will be released in summer 2011 by Razorbill.  The novels will be adapted by Leigh Dragoon and illustrated by Emma Vieceli.
Posted by Michelle at 11:24 AM 0 comments

Scanilation Site to Close Down

This Thursday scanilation site One Manga reports that they will be shutting down operations.  In June, Japanese and American manga publishers changed their stance on scanilation sites and began taking an active role in removing their content from these sites (reported here in June - Japanese and US Publishers to Fight Scanilation Sites).


"It pains me to announce that this is the last week of manga reading on One Manga (!!). Manga publishers have recently changed their stance on manga scanlations and made it clear that they no longer approve of it. We have decided to abide by their wishes, and remove all manga content (regardless of licensing status) from the site. The removal of content will happen gradually (so you can at least finish some of the outstanding reading you have), but we expect all content to be gone by early next week (RIP OM July 2010)."

While they are shutting down their manga scanilations, their forums will still be active until they try out some new ideas.  They also encourage fans to fan them on their new Facebook page.  For further details you can check out Anime News Network and ICv2.
Posted by Michelle at 12:26 PM 0 comments

See the latest additions to the adult graphic novel and manga collection. Click on the links to reserve your copy now!

Deacon Blackfire, a charismatic shaman with roots as old as Gotham City itself, has amassed the city's homeless into an army, one he seemingly uses to fight crime. But Blackfire has a hidden agenda!  Batman: The Cult Synopsis - DC Universe

The Ghost in the Shell, Volume 1
In a near future, technology has firmly taken root into society at large. Cybernetic implants are nothing uncommon and robots roam as plentiful as humans, all connected through their ''ghosts'' to the electronic datastreams of the net. Major Motoko Kusanagi and the Public Security Section 9 find themselves in a constant battle with the newly created wave of technological terrorists and cyber-hackers. But things take a turn once Motoko gets involved in a certain case involving an extremely dangerous ''ghost''hacker nicknamed the Puppeteer, as she dives deeper and deeper into the limitless reality of the net, to reach her own startling conclusions.  Ghost in the Shell Synopsis - Anime News Network

More than a decade before the first DIE HARD movie, John McClane is just another rookie cop, an East Coast guy working on earning his badge in New York City during 1976's Bicentennial celebration. Too bad for him, nothing's ever that easy.  Die Hard Synopsis - BOOM! Studios

28 Days Later
Connecting the movie 28 DAYS LATER to its sequel 28 WEEKS LATER, this original graphic novel continuation focuses on Selena, one of the three survivors of the first film, as she embarks on an epic journey to return to Great Britain. Joining a team of American war journalists hell bent on venturing into the heart of Infected territory, they must learn the cold, hard truth of what it takes to survive in the U.K. after the Infection has spread.  28 Days Later Synopsis - BOOM! Studios

Iron Man: I am Iron Man

Tony Stark is a billionaire weapons maker…who’s given a taste of his own medicine. When he’s wounded and taken prisoner in the Middle East and forced to build a missile for insurgents, Tony creates a suit of armor to keep him alive and blast his way out! Now Tony sees the folly of his greed, and sets out to right wrongs as the armored avenger…Iron Man!  Iron Man Synopsis - Marvel

The Chill
It's summer in New York, but a "chill" has settled over the city – a serial killer is on the loose, and the ritualized murders are becoming increasingly sadistic. The NYPD and the FBI have a suspect: a gorgeous young woman named Arlana. The only problem is that every witness provides a different description of her. None of it makes any sense to anyone except Martin Cleary, a beaten-down Irish cop from Boston with a whopper of a secret in his past – and a past that may go back a century or two .  The Chill Synopsis - Vertigo Comics

The definitive tale of the JLA's formation is back in a new printing of the massive book starring The Flash, Green Lantern, Black Canary, Martian Manhunter and Aquaman. Collecting the entire, original twelve-issue miniseries!  JLA: Year One Synopsis - DC Universe

Anita Blake: The Laughing Corpse
What would you do for a million dollars? Would you resurrect a two and one half century old corpse? Harold Gaynor poses just that question to Animator and part-time vampire hunter, Anita Blake... Plus, some crime scenes are even too horrible for a vampire slayer… and the worse they are, the more questions they raise.  Anita Blake Synopsis - Marvel

He’s been a warrior. He’s been a prisoner, falsely convicted of his wife’s murder. Now among the strange crew of the living ship Moya, D’Argo tries to protect his friends while avoiding the grip of the Peacekeepers! D’Argo and Jool only need some equipment for Moya, else she and everyone inside her dies. An important mission soon gets out of hand when D’Argo finds himself between two warring factions, each trying to use D’Argo for their own purpose!  Farscape Synopsis - BOOM! Studios

Hellblazer: Original Sins
John Constantine is an unconcerned, somewhat amoral occultist with a British working-class background. He's a hero, of sorts, who manages to come out on top through a combination of luck, trickery, and genuine magical skill.  Hellblazer Synopsis - Vertigo Comics

From beyond the farthest frontiers of any solar system explored by man, a destructive force is sweeping through the universe wiping Callystes, Dakoï, Lilith and Planet Earth from the stellar map. A rocket full of refugees hurtles through space with the letter “K” emblazoned on its side. On board the unlikely crew of seven children, several adults, an ancient wizard-knight and the ghost of a cyborg travel with a mysterious cargo that will alter their fates forever.  Kookaburra K Synopsis - Marvel
Posted by Michelle at 7:48 PM 0 comments

Marvel Studios is planning to start production on a movie adaptation of their popular Runaways comic.  According to ICv2, Peter Sollett, director of Nick and Nora's Infinite Playlist, will direct and Drew Pearce will write the screenplay.  It is still unknown when the film will be released, but it is scheduled to begin production in early 2011.
Posted by Michelle at 3:19 PM 0 comments

The Indian River Library Anime Addicts hosted a cosplay event on June 17th.  There were trivia contests, a chopstick challenge, anime to watch, and of course a costume contest.  To see our teens in action, click on the video below.


Some of the teens displayed their dancing skills (I am tired just from watching)!

Posted by Michelle at 4:08 PM 0 comments